Welcome to the Bolt Wiki

The film's plot centers on a small white dog named Bolt who, having spent his entire life on the set of a television series, thinks that he has super powers. When he believes that his human, Penny, has been kidnapped, he sets out on a cross-country journey to "rescue" her. 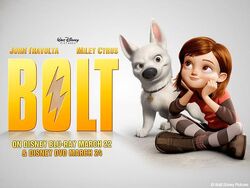 Retrieved from "https://boltmovie.fandom.com/wiki/Bolt_Wiki?oldid=4112"
Community content is available under CC-BY-SA unless otherwise noted.